The Blind Man of Jericho

Performance: Venice Biennial Opening, 2003 Produced by Placentia Arte Gallery
Video: Italy, 2003, colours, 11’42”  ed 3 + 2ap
Videostills and  STRIP, 2003 ed. 7 +1ap
Photos from monitor: series of 9, ed 3 + 1ap
The concept of the work is a ‘light’ critic of the hypocritical ways that make people act without ‘seeing’, and live without seeing, even if they think they do. Art exhibitions are visited but often they are not ‘seen’. Most people go there not to see but to be seen.
The performance is acted in a real-life situation, to create a bridge between reality and fiction, the world and art. In this way people’s reactions are an essential part of the work.
The work is an ironic and paradoxical way of showing invisible concepts and behaviours in a visible way.
The same project had been performed, a few years later, at the Armory Show in New York with completely different results and interactions. (see below, I love to see the Armory) 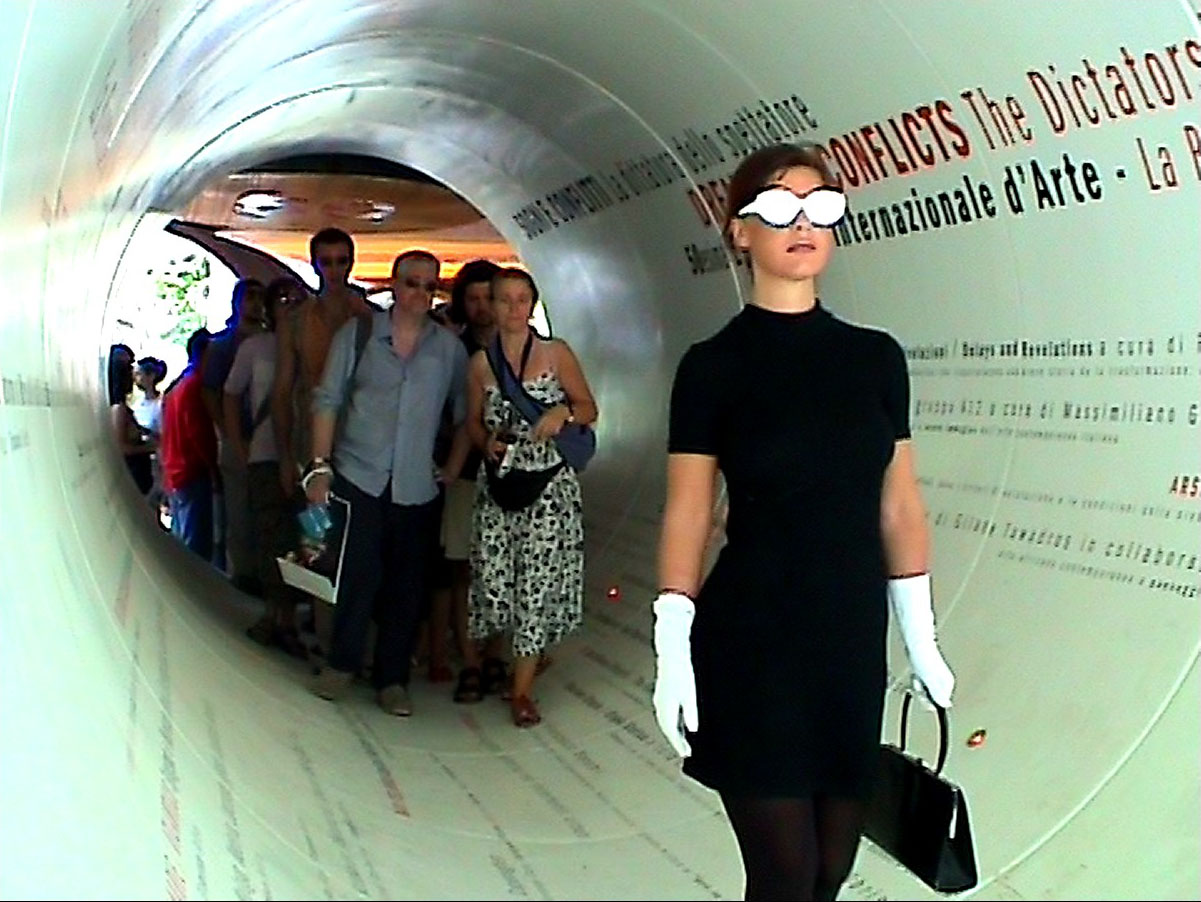 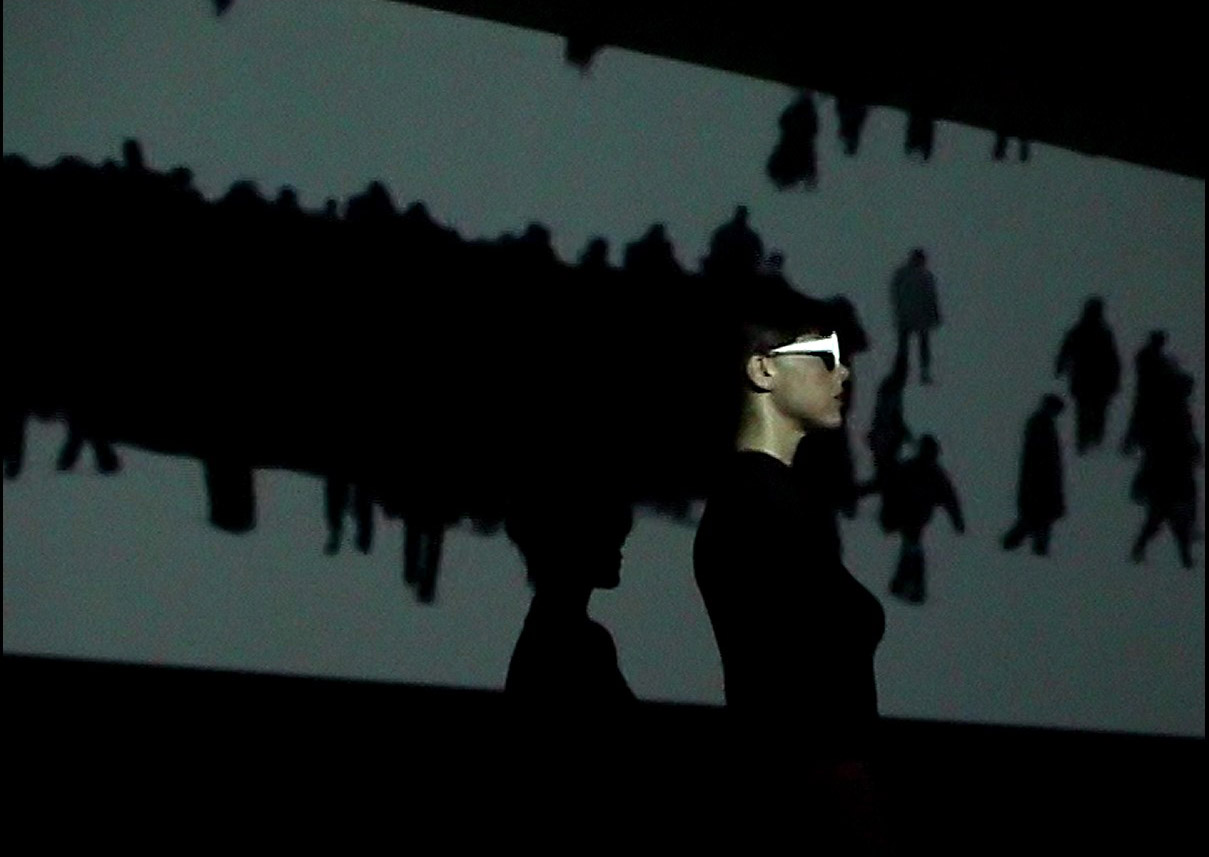 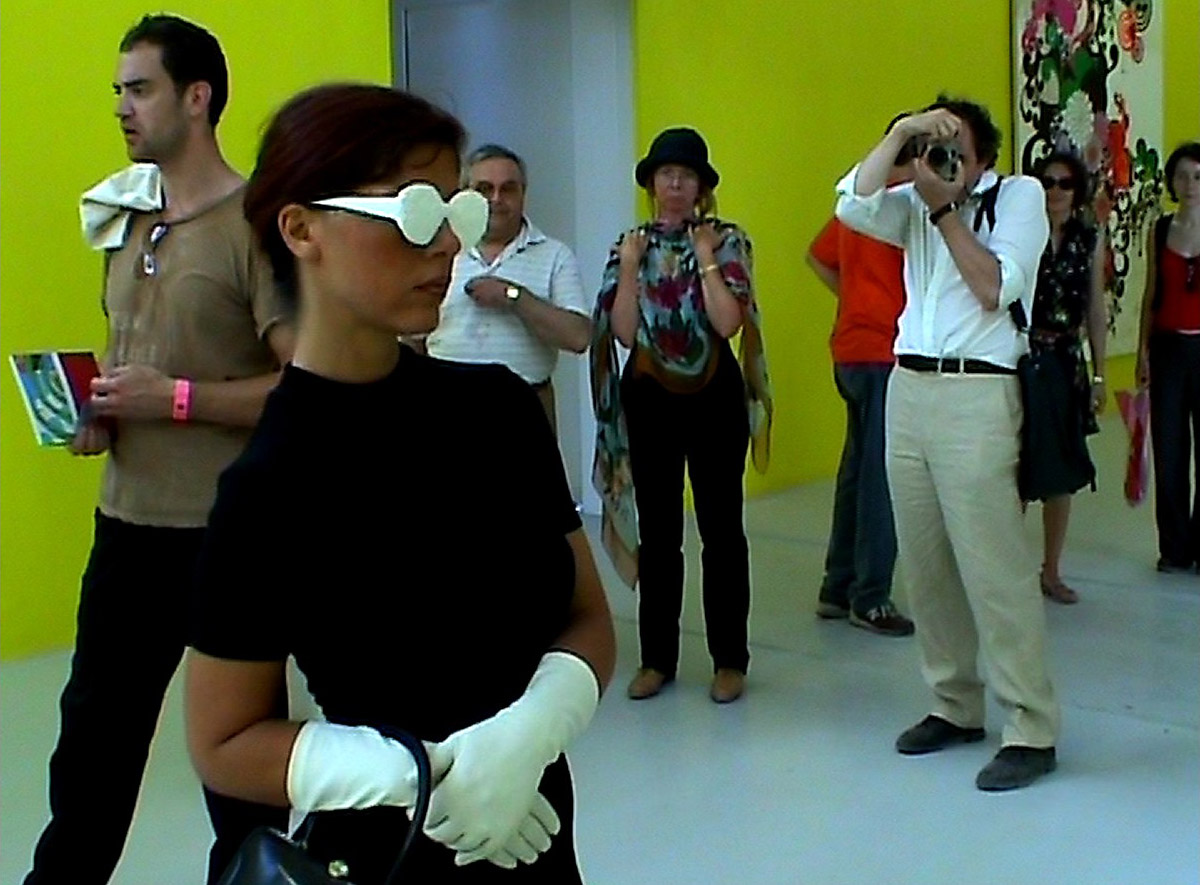 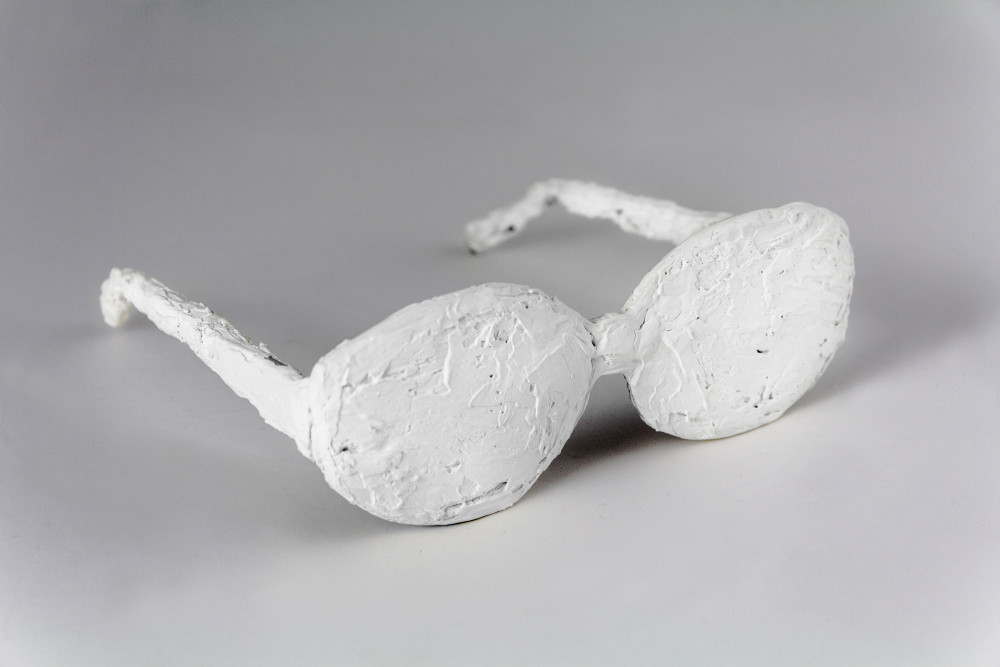 I Love To See the Armory

The concept of the work is a ‘light’ critic of the hypocritical ways that make people act without ‘seeing’, and live without seeing, even if they think they do.Most people go to exhibitions not to see but to be seen.  The video is an ironic and paradoxical way of showing invisible concepts and behaviours in a visible way.

People’s reactions are an essential part of the work. Reactions made at the Venice Biennial Opening in 2003 (Il Cieco di Gerico– The Blind Man of Jericho) are completely different from the ones at the Armory Show’s Opening in New York. The performance and the resulting video is therefore as well a subtle sociological analysis of various countries and people. 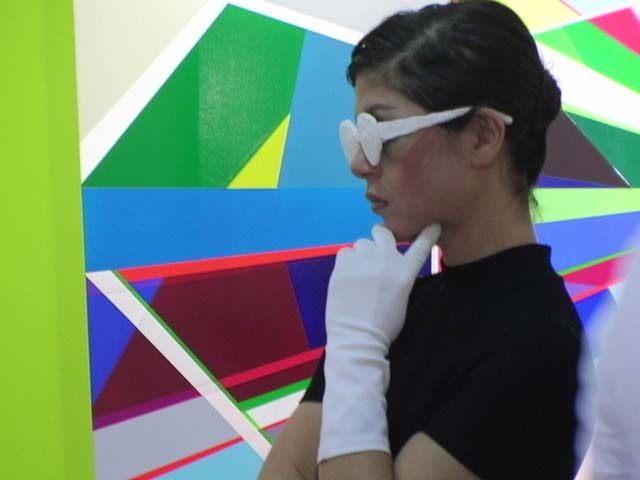 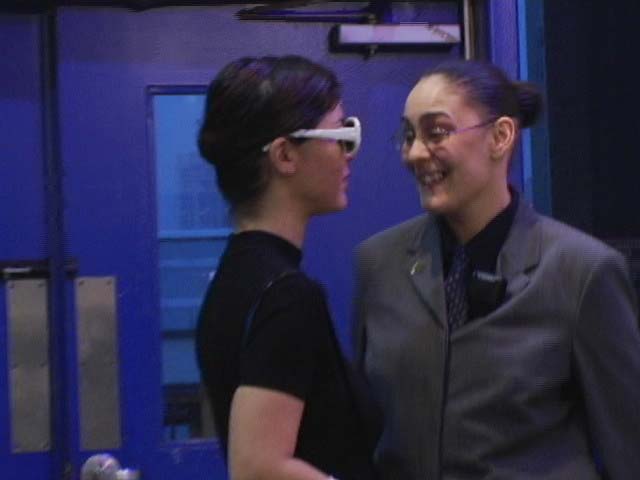 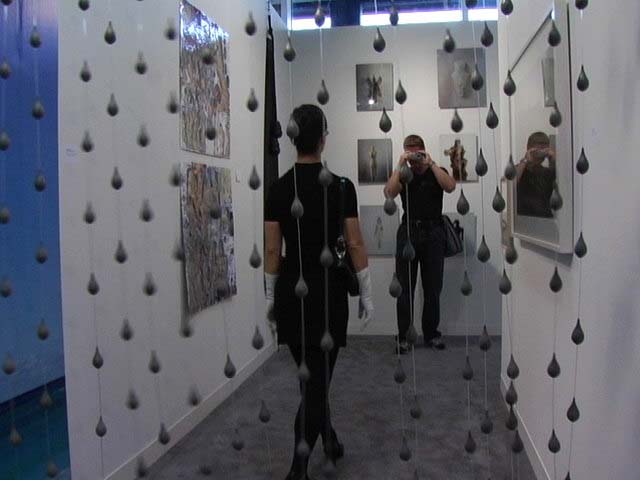 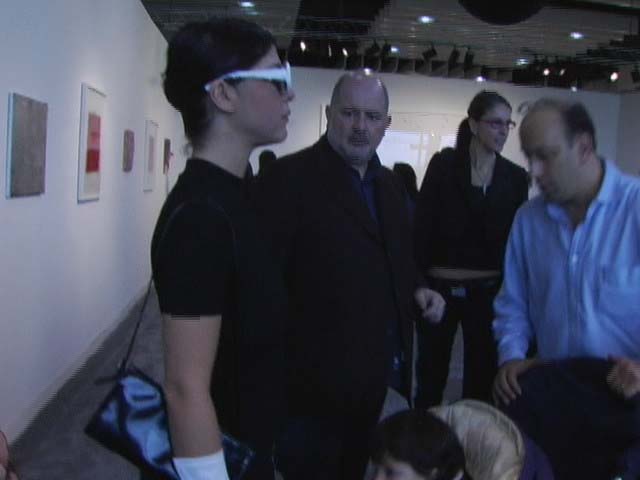 In 2011 the Künstlerinnenverband Bremen / GEDOK organized a Festival of Performance which brought together international performers with artists of the region.  The festival took place within the Bremer Kunstfrühling, organized by the BBK (Bundesverband Bildender Künstler ­– the association of artists) in a former freight terminal.
It included a curated exhibition as well as presentations of museums, galleries and artist associations of Bremen.

Between the 5th of May and the 6th of June every weekend there was a live entry: invited guests included Jessica Findley from Brooklyn, New York, the Austrian Marc Aschenbrenner, Nezekat Ekici of Turkish descent, Marcia Farquhar from Great Britain and LIUBA from Italy. Artists from Bremen included Kerstin Drobek, Elianna Renner and Gertrud Schleising.
The festival program of the Künstlerinnenverband shows aspects of contemporary performance as it is found in the international context – body related, societal, political, theatrical and interactive approaches.

LIUBA stated her performance was to start at the city station, and involved getting off the train and then walking into the city center in direction of the Bremer Kunstfrühling show, to ‘see’ the exhibition. The reaction of the people, the interactivity of art in the everyday life, and symbolism are the basis of this work.

Tiresia Marittima is a participatory performance, a video work and an installation. It is a development, in an urban and participative way, of the topics of seeing / not seeing started with the Blind Man of Jericho project at which LIUBA has been working on since 2003.

The performance Tiresia Marittima was realized in 2017 for the opening of LIUBA’s solo show “Guardando Oltre”, hosted by Marconi Gallery. The title explicitly refers both to the famous blind Tiresias – the one who doesn’t see, but knows – and to the place where the participative performance took place, Cupra Marittima.

For the performance the public was invited to leave the gallery space and walk through the streets with their eyes covered by a pair of white stuccoed glasses – hand-painted by LIUBA from old glasses she collected through an open call. The participants explored the city by recognizing its streets, squares and paths without trusting their eyes, but finding a new paradigm of knowledge and exploration through touch, hearing and memory of the gestures of their bodies.

At the end of the performance, each participant was awarded a certificate of participation, and requested of writing a comment on their performance experience. The comments were later collected by LIUBA, and assembled into an installation showed at the Gallery for the duration of the show.

One year after the performance, and in her typical working method, LIUBA realized the homonymous video Tiresia Marittima, by editing more than 1000 photos taken by Catia Panciera during the performance and assembled together with fragments of the hand-written comments left by the participants themselves.

Realized by editing the photographs of the homonymous 2017 participatory performance, the video Tiresia Marittima explicitly refers both to the famous blind Tiresias – the one who doesn’t see, but knows – and to the place where the action took place, Cupra Marittima, in Italy.
After one year from the performance, and following her typical work process, LIUBA has realized the homonymous video Tiresia Marittima, editing together more than a thousand photos shot during the performance by Catia Panciera, with fragments of hand written comments left by the participants themselves, collected in an installation.

Translation into english of some participants comments published below:


#19:
” i miss the earth under my feet
but… images sometimes are very tiring
i get very relaxed indeed.”

#14:
“I don’t see anymore…
I am afraid!!
Who is in front of me? Who’s at my side?
I hear noises but I don’t know where they come from
I touch who is at my side, I look for help, maybe consolation”

#12
“The space that divides my inside with the outside
is growing more thick and more dark
The world seems caressing us without invading us.
Thank you LIUBA!”

#11:
“isolation, absence of orientation,
frustration for not being able to see
taste of being close to the sea just because other people talk about that
At the same time feeling safer because of the proximity of others
but fear of depending from others.
perception of the place through sounds

#1
Unique and very involving human experience.
I was feeling part of a group
even if, except my husband, I didn’t know anybody.
We were all the same. Limited in our vision but each one with his/her own feelings
I tried to perceive the vibrations on the carpet
and I felt a sensation of belonging to a shared experience.”

#16:
The first idea is to bluff, that is looking through the sides of the obscured lenses.
But then for what?
So i closed also my eyes, and fiction became reality.
You are no more autonomous, if you want to follow the group you have to stick to the neighbour…
Sounds are the only geometries, and voices the orientation.
Despite not having established relationships with the neighbours
many barriers are lowered and the sense of belonging is automatic
And much more…