Today I arrived at Oranien Platz around 2pm. The weather was dusky and humid. I talked with some people, everybody very kind. Most of the people were different from the ones of yesterday, but I recognized some of them, and they did the same to me. So today the approaching was a little easier.

I talked with a guy from Niger that was living in Lybia before leaving Africa. We talked italian because he had been living in Italy for some time, then he tried in Germany. He now has got a 2 days a week job creating Christmas lights in a shop. He showed me some pictures (from a nice smartphone) very proudly. He told me he had a nice job in Lybia and no money problem, but he can’t go back because of the war and of the terrible political situation there. He was very interested in participating to the performance action. I think he completely understood the point and the sense for them to come. I hope he will. We saved our phone numbers.
Among others, not really very interested in talking with me, I met a Turkish activist who instead was very interested in talking to me. The conversation was not that simple, because he only spoke Turkish and German, so I had to try to pick up from my brain all the few German words that I had in my memory…but, for the essential, it worked. He is a journalist and activist who had been in prison 15 years in Turkey. He was condemned for live sentence, and two years ago he was liberated through the help of humanitarian institutions as amnesty international. He went to Germany and he got political asylum, with ‘wohnung’ and money. However, he still struggles with the people, and he now lives into an occupied school, where many of the refugees people live (he said 150). We went together to the school, he wanted I took some pictures there. It was a good idea, I was very interested in it, and also after more than two hours under the big tent I was really freezing…
The school was huge and dirty. I met some people, and also a Rumanian group of families with 10 childrens. They asked me money to take pictures. I gave them 2 euros but I didn’t take any picture. Then Turgay, that’s the name of the Turkich journalist, showed me the space where he lived. I was thinking that was not so different from the prison were he was living 15 years in Turkey.. but he was free, and he got all he needed: books, computer, internet, laundry machine, cooking fire and heating. We decide to make a short interview to him, telling us the important points of the refugee protest. Of course he spoked in German. I will have to contact someone for translation…Then we had an excellent cup of Turkish tea. He was very kind. He is really a nice and smart guy. 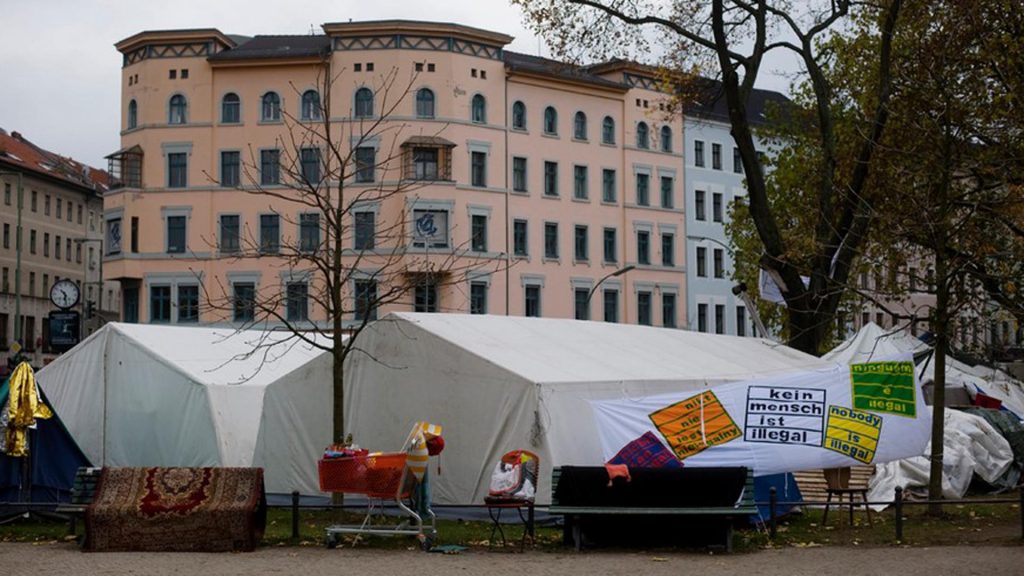 This blog is mostly in italian