Untitled (2010 – 2020) marks another chapter in the research LIUBA has dedicated to the social and relational dynamics underlying the art-world. Following her typical working pattern, consisting in intruding herself in real life contexts with a surprise-effect, LIUBA attended the opening of Artissima with a white dress, long, loose hair and bare feet – offering hugs to the public of professionals, curious and spectators roaming Turin’s Lingotto. Their reactions have been recorded by a video operator and a photographer who secretly kept track of the momentary intimacy created between the artist and those who accepted her invitation to be held, even if only for a few moments .

With this simple and direct action, LIUBA aims to bring attention to the human and emotional value of relationships, often set aside in the art-world in favor of business-like exchange, which frame people in well-defined and stereotyped roles (artist / spectator / gallery owner / buyer). The embrace-gesture therefore becomes the tool to carry out a criticism of the system in which the artist herself moves.

In 2020, after the COVID-19 emergency forced people in isolation into their own home and into social distancing, with no other contacts than the ones mediated by technology, the action of embracing a stranger looks like a remote reality, almost impossible to resume as a social practice.  Aware that in the era of global pandemic these images take on further meaning,  LIUBA decided to devote herself to this video, which she began in 2019, during the 2020 quarantine and to finish it while still in isolation.

Untitled (2010 – 2020) is the result of a montage of frames and photographs which moves on the notes of Ciajkovskij’s Waltz of the Flowers, a tribute to the metaphorical dance steps made with all the people the artist have met during her action.

“The need of this work comes from the discomfort felt on my own skin, due to the coldness which often characterize relationship in the art-world. Relationships are often born thanks to shared projects, business, utility, to get to know each other, to collaborate .. but the meeting dynamics are almost always cold, impersonal, hurried and stressed. We are losing the ability to establish “warm” and affective relationships with others.

For this reason, I imagined a performance where the main-characters are the embrace, the human contact, the tightening of the body against the body. And a “formal” context such as the opening of an important art fair, where everyone meets, talks, exchanges opinions, does business … without ever really meeting, amplifies this message.

At that time, free-hugs flash-mob were not a thing yet… were they inspired by this performance? 🙂

It seems to me that our society is losing its physicality and emotion, and the relationship with others is more and more mental or utilitarian, or even virtual, as it happens with e-mail, chat, social networks, sms. Instead, I am interested in the human side of people and the physicality of life. “ 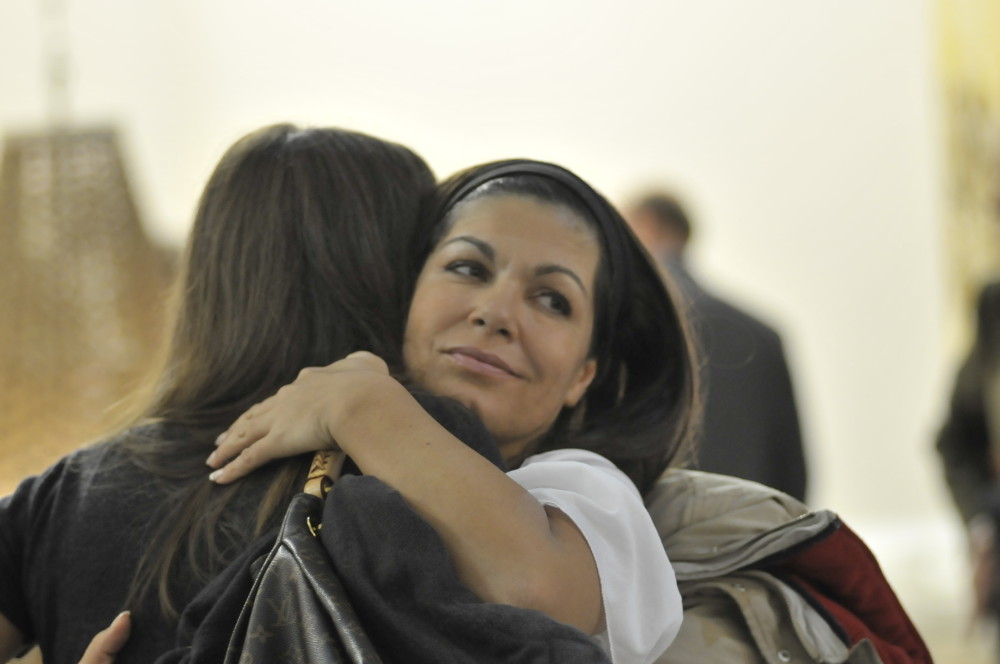 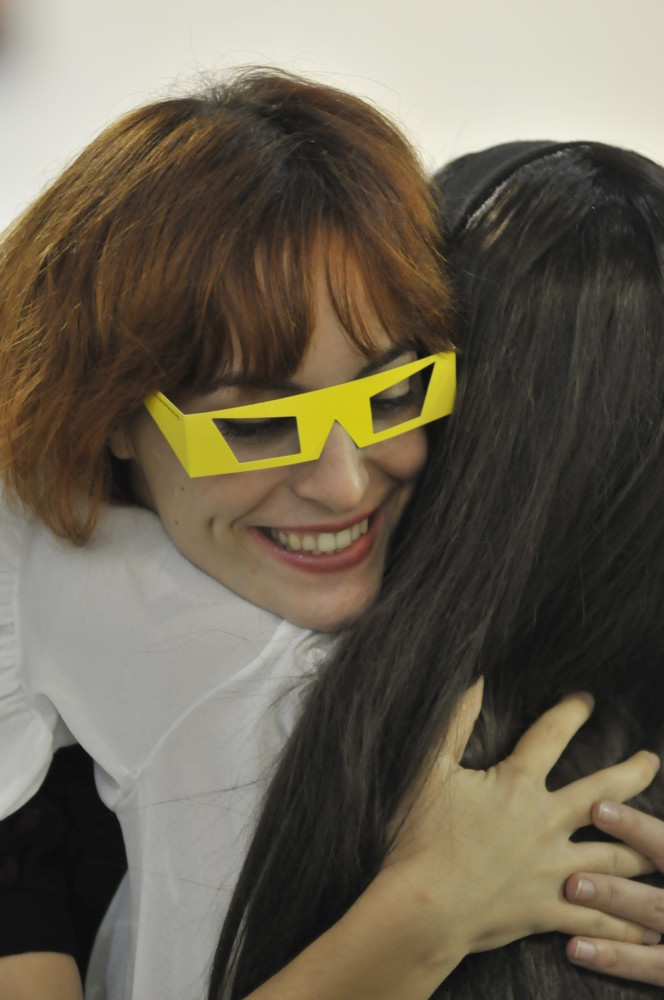 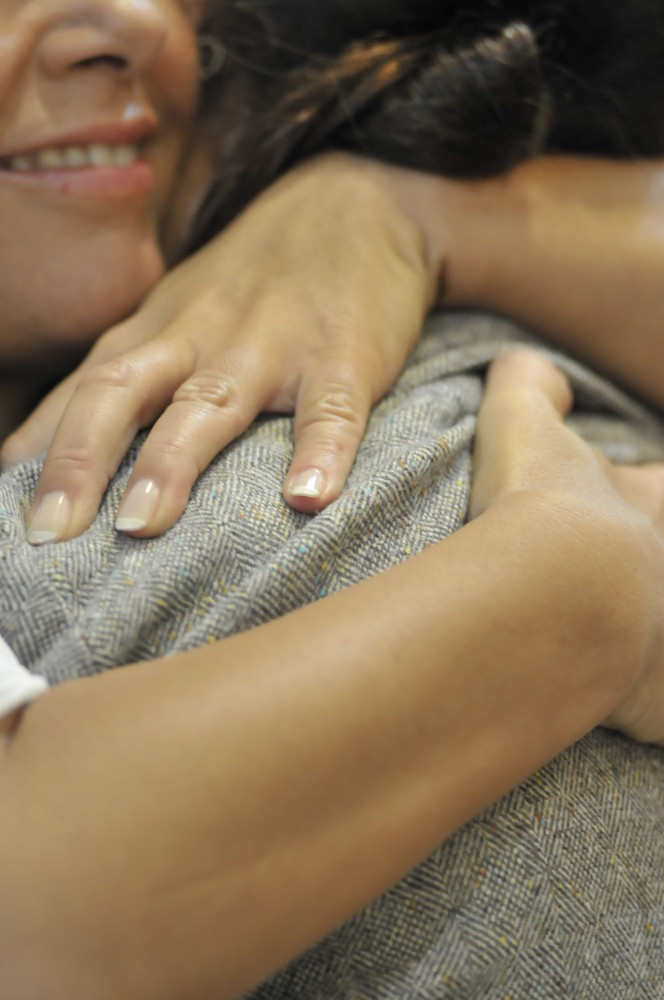 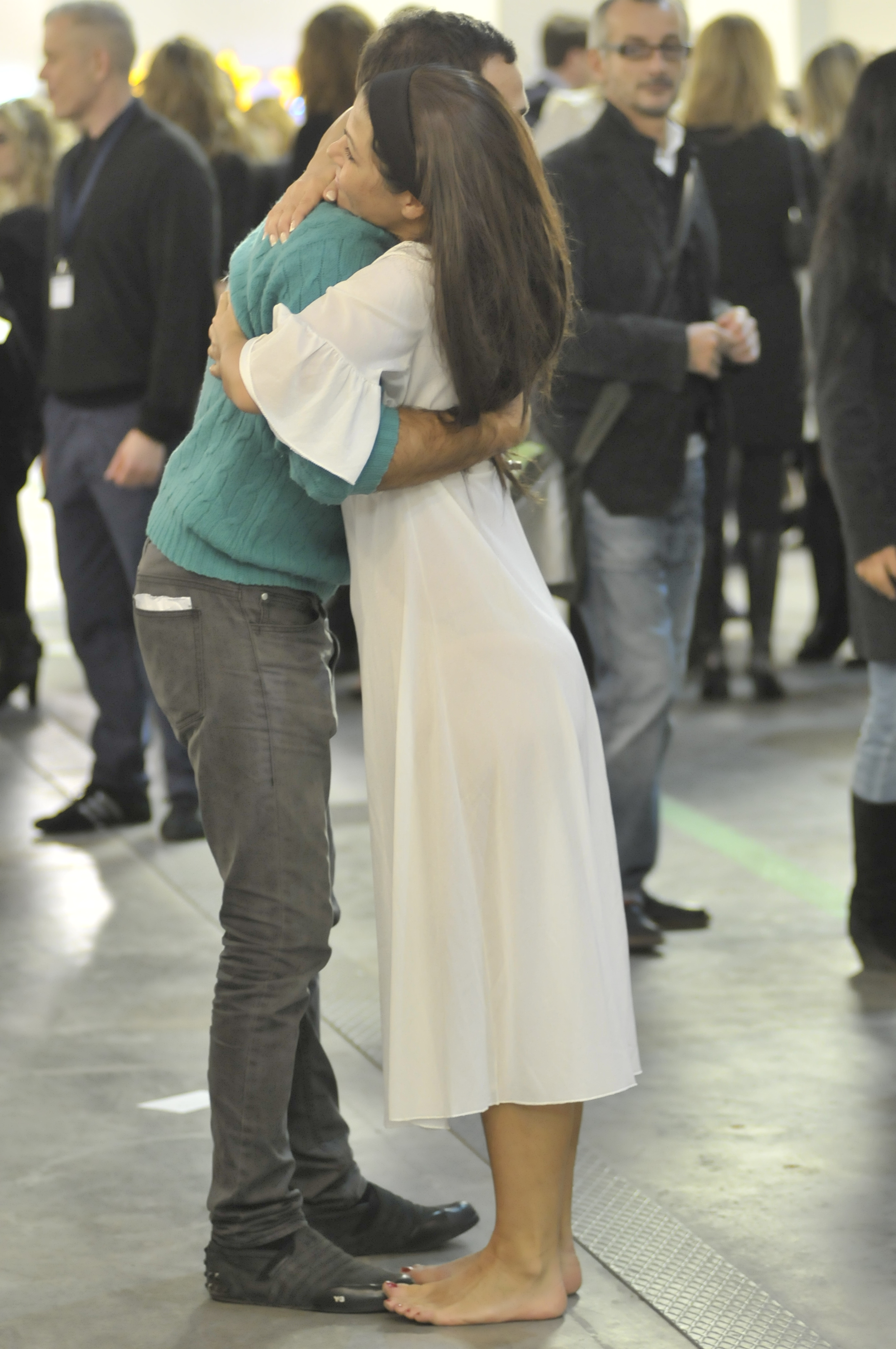 The unpredictability of human reactions to an unexpected and unusual act, like a hug from a stranger, makes the performance a kind of meta-language between social studies and artistic gesture. The performance touches some taboos and phobias endemic in our society which has now basically removed spontaneity and physicality from normal human relationships.

For Artissima 2010 LIUBA decided to create this new performance based on the theme of the embrace and involved directly the public visiting the exhibition. The artist walks through the corridors of the event dressed in white, barefoot, unexpectedly embracing people chosen at random. The hug may be more or less physical, long, affectionate, tender, depending on the sensitivity of those with whom it interacts.

The idea was born from the artist’s disappointment in human relations within the art world and in the coldness of the relationship with the people met in various contexts. “We often meet people for projects, business, convenience, duty .. but the dynamics of meetings are almost always cold, impersonal, rushed and stressed. We are losing the ability to establish relationships ‘hot’ with others, affective, starting a dialogue with the individuality and personality of each one.”