The Slowly Project started in 2002 and is still a work-in-progress. It consists of a series of LIUBA’s performances in various cities around the world and of the videos capturing these performances. The videos are part of an ongoing video-installation.

The performance consists in moving in ‘slow motion’ in daily life, walking so slowly that the performer becomes a shocking figure for people in the city.

The project is a work aboout society and our lives but also a work about time: reminding us to take our time, in life and in art, beyond formal, stereotyped, and social ways. Slowness becomes a metaphor of a contrast between personal time and social time, between interiority and exteriority.

In the performance, LIUBA walks in ‘slow motion’ on busy places and streets, in daily life, doing everything slowly and thus becoming a shocking figure for the people around her. She is often an obstacle in their way, or she is believed to be mad…

The peoples’ reactions at the performance are very important for the sense of the work. Some people are amused and/or interested, while others are astonished and/or impatient. Some even get suspicious. And others seem to have a lot of fun.

Each video from the performances is an autonomous piece of work. Two hidden cameramen shoot the performances and the peoples’ reactions to them and LIUBA works on the editing and direction. The resulting videos are also of anthropological and sociological interest, because they compare the reactions of different people, countries and cultures in the same performance.

This work comes from a series of performances in the streets of Manhattan between 2005 and 2011.

The itinerary of each performance was carefully chosen, with the intention of going into the most nevralgic, symbolic and chaotic areas of the city, such as Wall Street, Staten Island Ferry in the early morning, World Trade Center, Grand Central Station, Times Square, Union Square, Metropolitan Museum, West4th.

“I consider my performances and the following videos as portraits of a specific society, city, country, because everything that happens reflects the identity of the place. Each video is completely different from the other, even when it is made from the same performance in different locations.

The reactions, the noises, the buildings, the people in New York were very special and specific. The video is like a ‘story’ of that place.

I use only original shootings taken during my performances. No studio shootings or actor interactions are used to edit my videos. What is shown is part of what ‘really’ happened and chance becomes one of the main hero of the work.

I would like viewers to reflect upon how difficult is to perform perfectly in ‘slow motion’, controlling each muscle movement not to go faster, for hours and hours in the day.

I consider ‘taking our time’ in life and society as difficult as this performance but, nevertheless, necessary “ 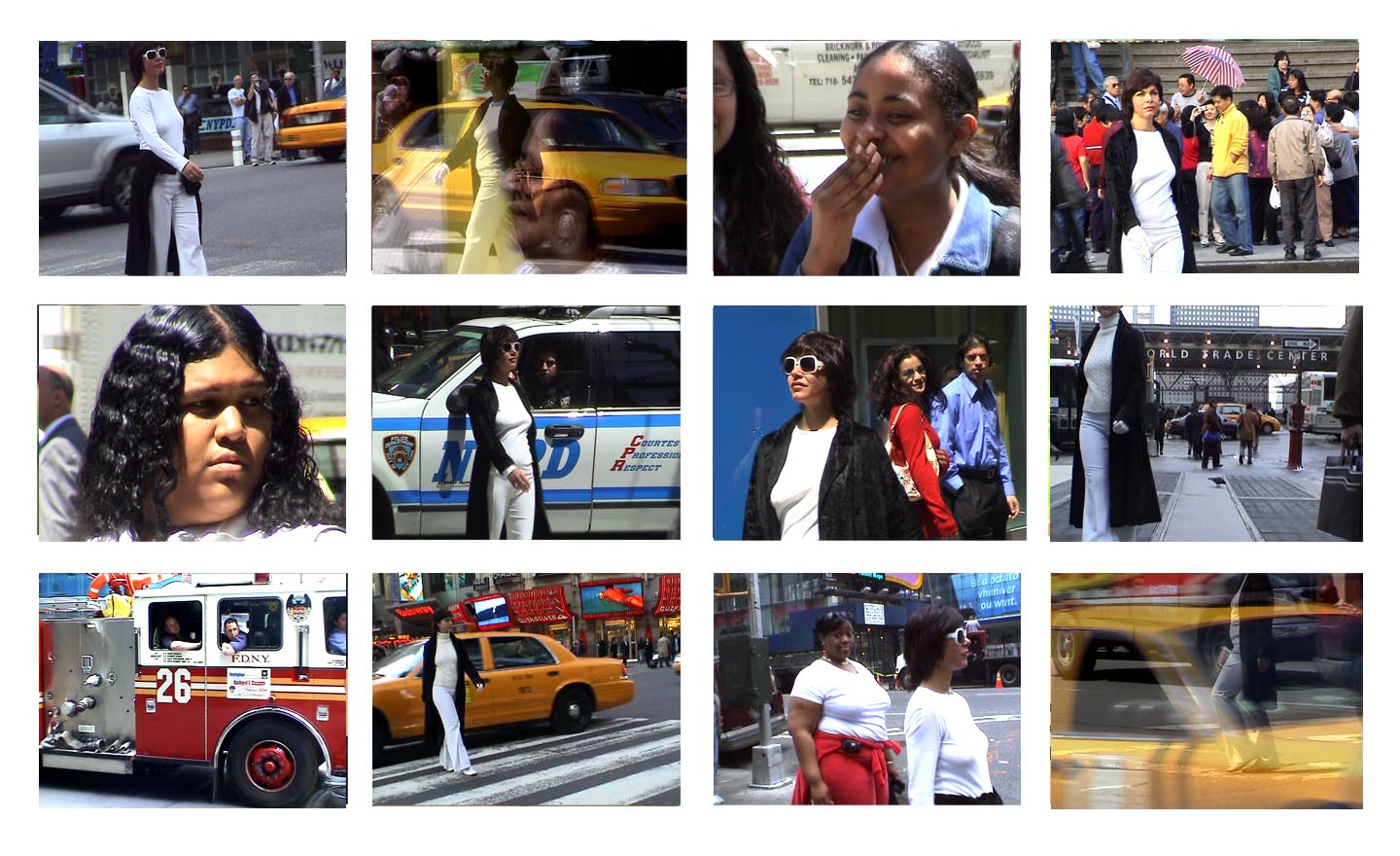 The Slowly Project. Take your Time - New York, 2005-2011, videostill composition from the performance

The Slowly Project – Art is Long, Time is Short – Basel

“My intention is to focus on the concept of length as a definition of Art.

The endless work of research, making, targeting and trying may be longer than one’s life and longer – and deeper – than social art world necessitates and demands.

My interest is in visualizing this concept with my body, creating two different levels of time.

The video, resulting from three days of performance and from three different cameraman’s footage,  has been built as poetry and as a ‘moving painting’. I worked on the editing, searching for ways to express emotions, aesthetic pleasure and concepts. The video is in loop and I consider this work to be a painting in motion, to be seen on the wall or in a flat screen on the wall.”

This kind of performance required many months of preparation. The training was long and intensive in order that, through control of the body and of each muscle, a seemingly fluid and  ‘slow motion’ effect is created. 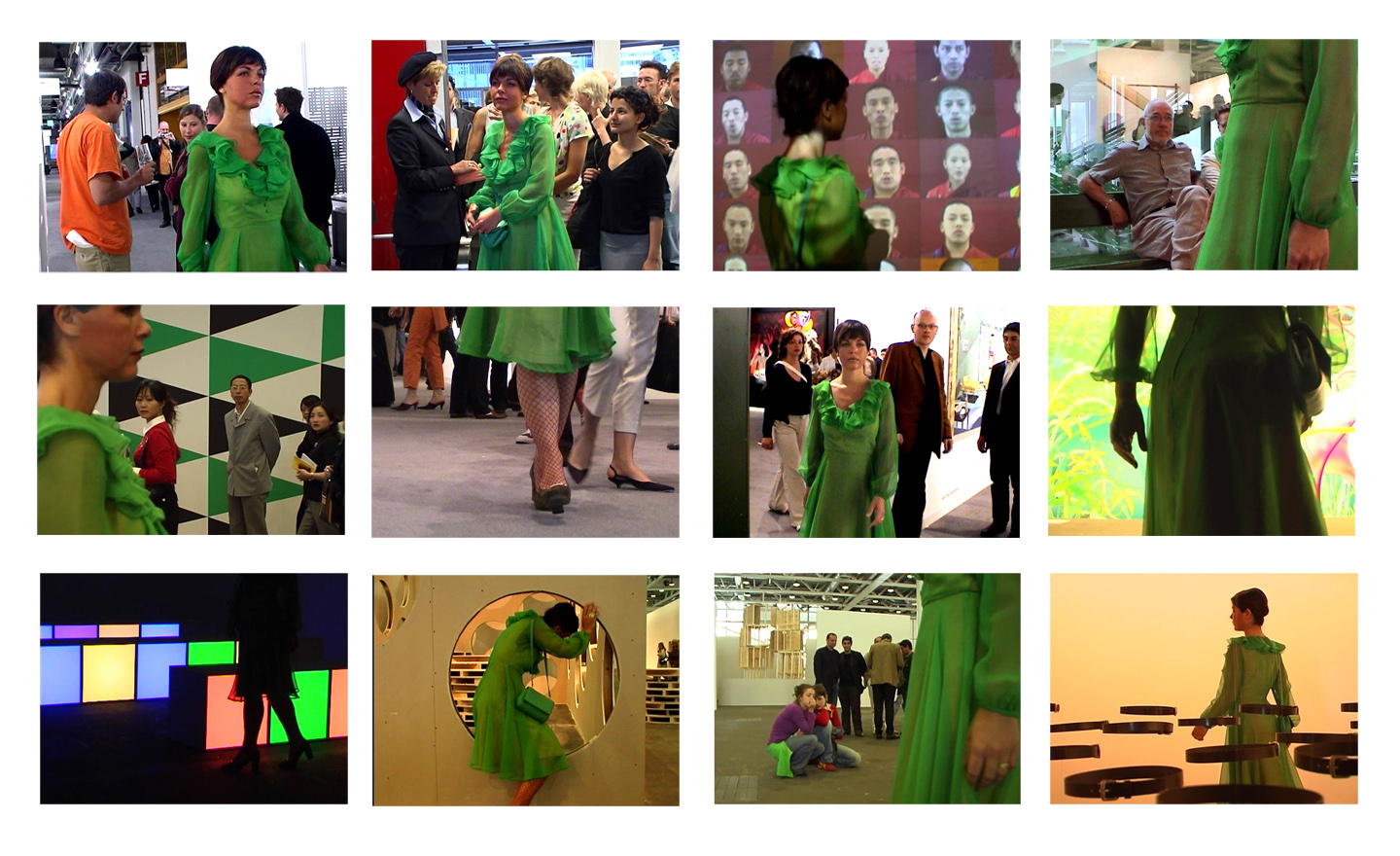 The Slowly Project. Art is Long, Time is short, 2004-2009, videostill composition from the performance

This performance was prepared for a public event organized by the Environment Department of the City of Modena. LIUBA went to Modena many times to study the performance schedule and itinerary, considering the most crowded hours and parts of the city.

The performance consists in moving in ‘slow motion’ in daily life, walking so slowly to became a shock to those in the busy and crowded parts of the city.

This kind of performance required many months of preparation and involved a long training to attain control of the body and of each muscle,  in order to create seemingly fluid and slow motion’ effect. 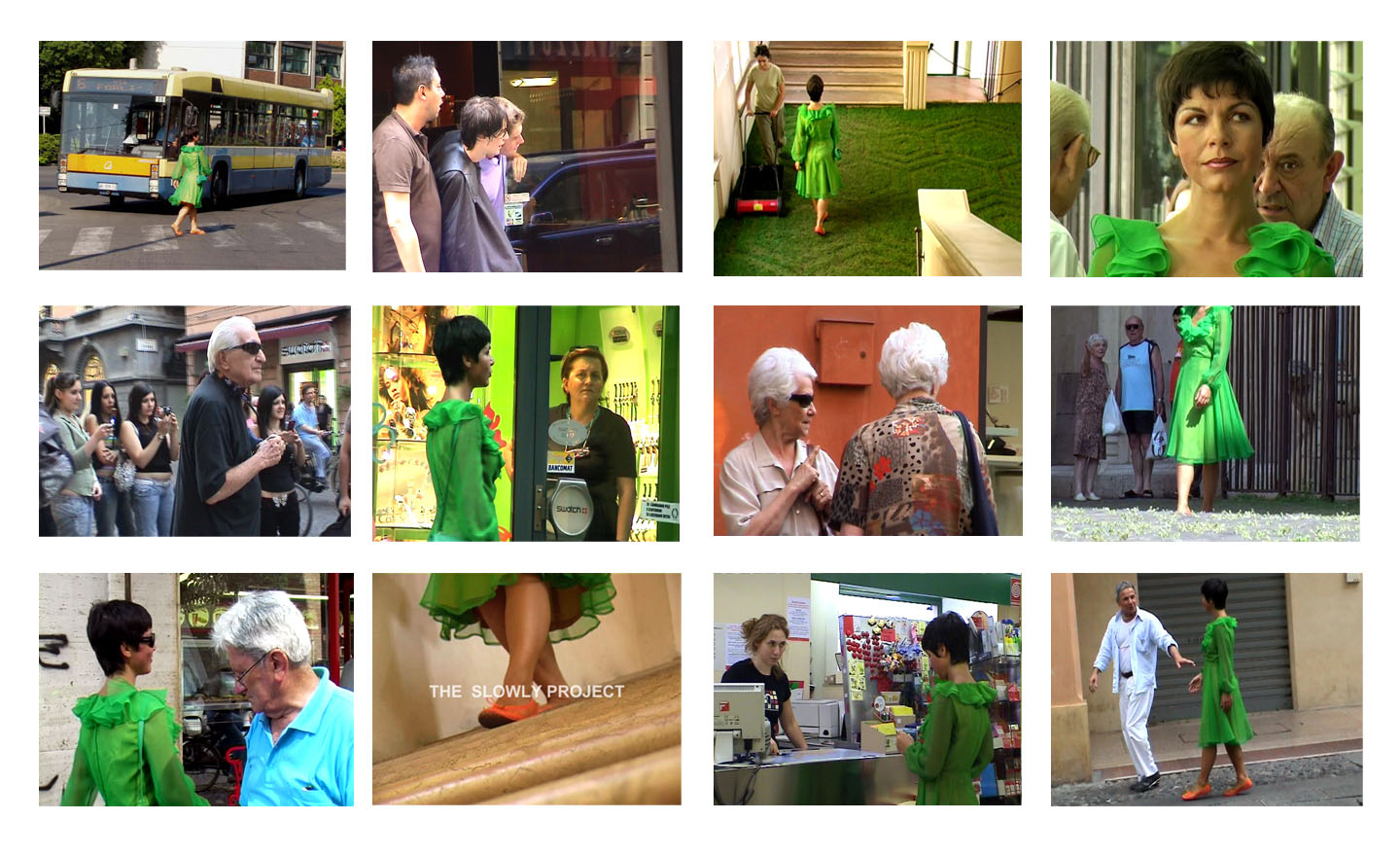 The Slowly Project. Take your Time - Modena, 2007-2008, videostill composition from the performance

Here are some LIUBA’s poems, previously written, that are connected to the project:

Requested to bring this project to Cantu in the Corpi Scomodi public art event, curated by Filippo Borrella, LIUBA decided to extend the performance to other people, to make them experience ‘physically’ with their bodies what it means to take their time, going slowly.

The idea is to expand the performance to other people, in order to invite the public as a main protagonist of the art work, and not only as a viewer.

So the artist called citizens to participate to the performance with her, organizing a workshop the day before to help people learning the technique for the realization of the performance.

The result was exciting, especially for the enthusiastic reaction of the people who actively participated in the performance. 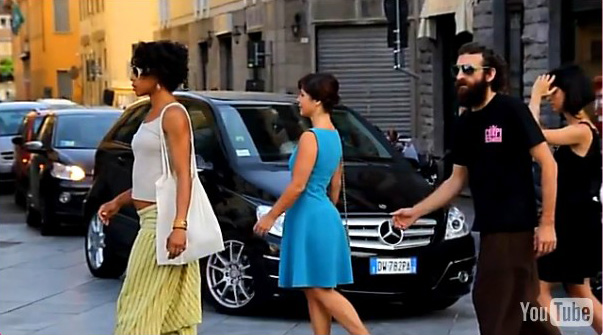 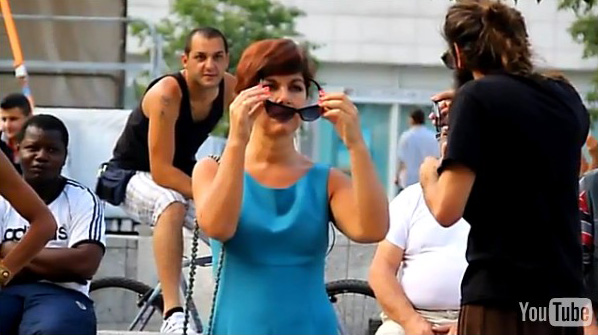 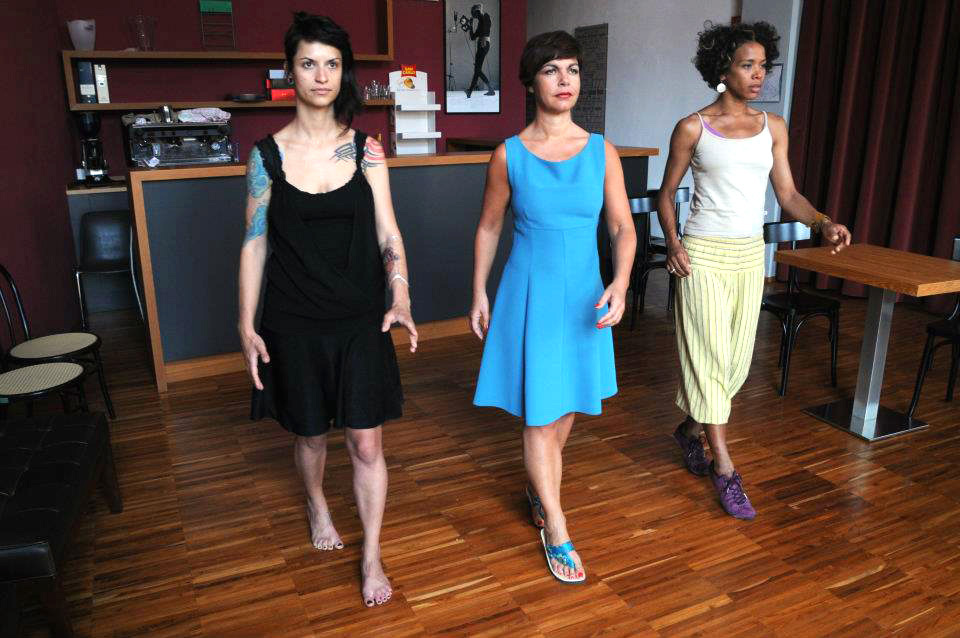 The Slowly Project. Cantù, 2012, photo from the preparatory workshop

The Slowly Project started in Milan with a series of performances in the busy city center streets during Christmas time.

In this first series of performances LIUBA also used a very small, detective-type camera hidden in her fur hat with the aim to shoot what she was seeing with ‘her own eys’ and to integrate it to the cameraman shootings. She also had an assistant who, unseen, tried to record people’s comments with a digital sound recorder.

The reactions were hilarious, and the resulting several hours of video and audio recording were so broad and articulated that the video hasn’t had finished yet… Indeed this is a project about Slowness … so what’s the problem if after more than 10 years, the video is not finished yet? Being patient is part of the nature of work 🙂 Who is in a hurry?

Nevertheless, there are some videostills. 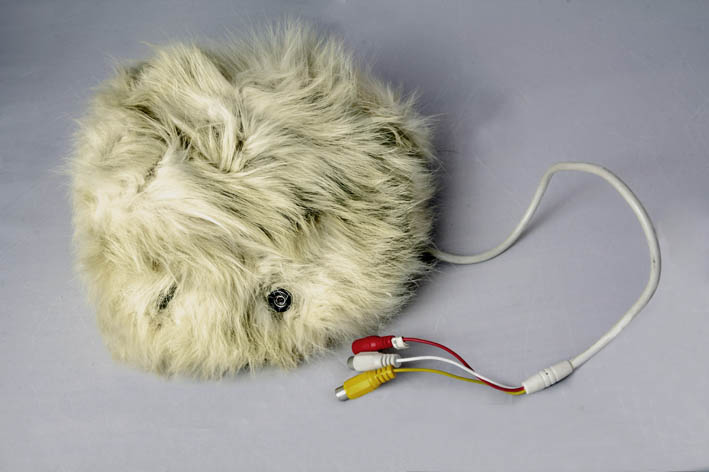 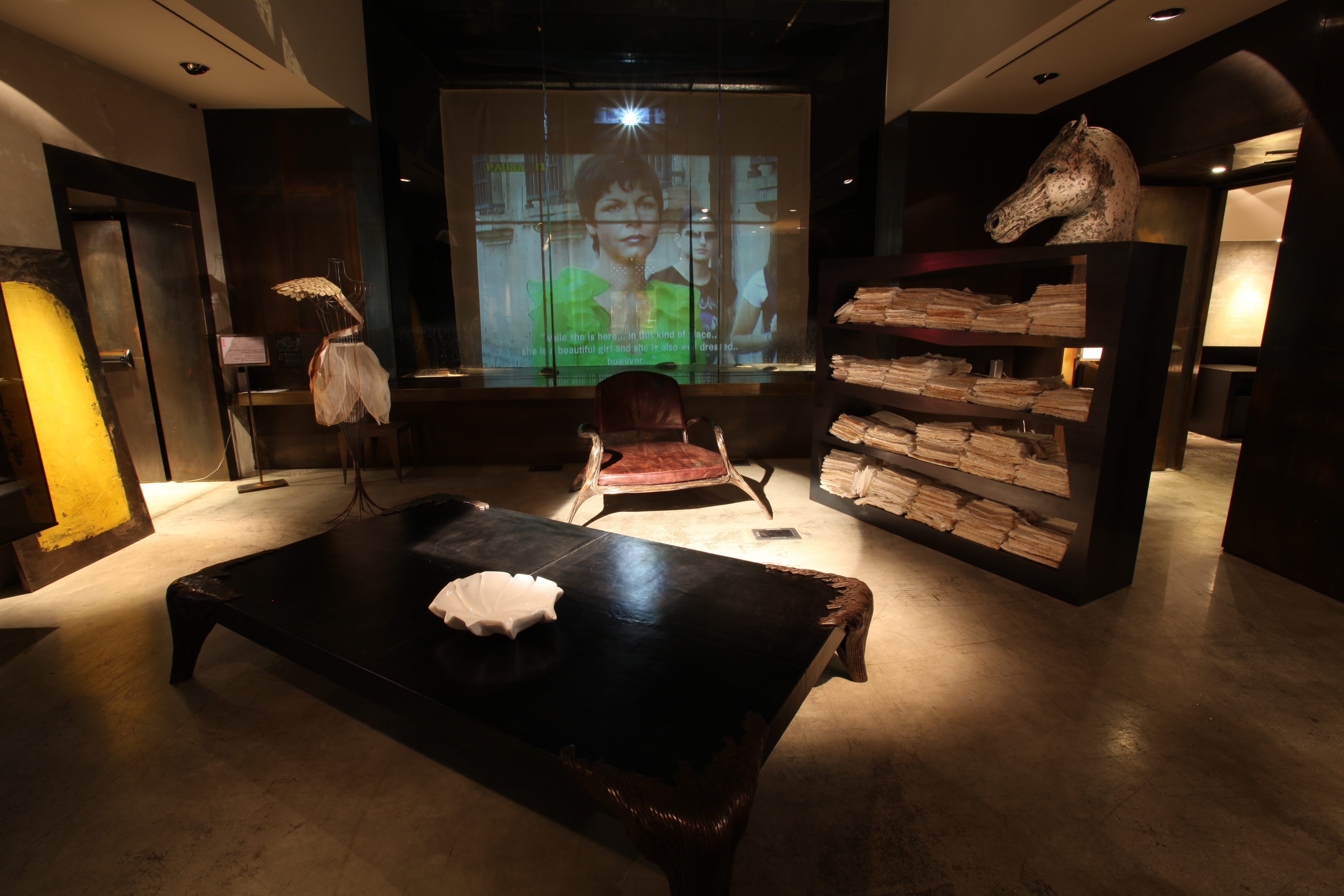 Videoinstallation of ‘The SLowly Project’ during the Milan Design week, Straff Hotel, Milan, 2009

Videoinstallation of ‘The SLowly Project’ at gallery Project, Ann Arbour (US), 2011

An interview to LIUBA bt Luca Panaro in occasion of the event Centrale Fotografia in Fano, 2015, where LIUBA performed The Slowly Project and all the videos of the project were shown. 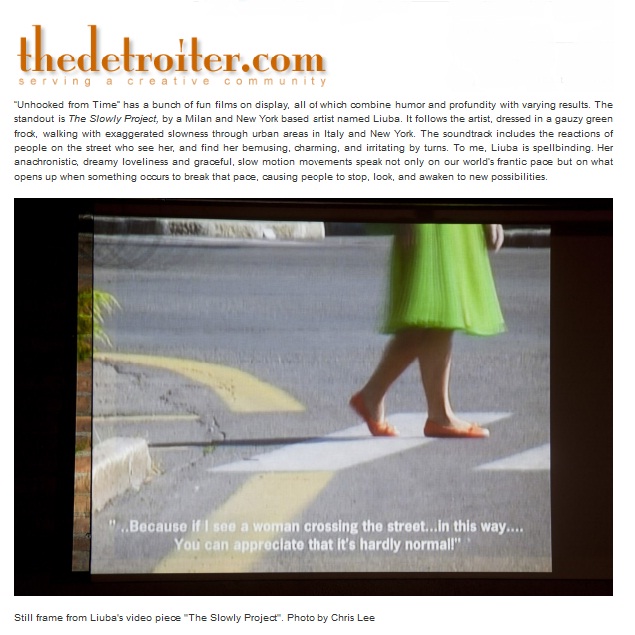