Since the tragic refugees exodus that continue undeterred, Germany has decided not to follow the Dublin Convention anymore, at least for refugees coming from Syria, and to welcome them, regardless of the fact where they first arrived in Europe. This is an important step and very good news. On the other hand however, there is yet today another terrible news concerning the death of hundreds of people, both in sea and in trucks, in their desperate journey to escape from their countries to Europe.

For all those reasons I decided to make my new ‘Refugees Welcome‘ video FULL VERSION available online for a week, even though it is yet to be exhibited and published officially.

I decided to release it because this work was created with the intention of raising awareness and support. The project was created in Berlin, as a site specific project during the Refugees protest in the Kreuzberg Oranienplatz Tent Camp.

On my website, you will find information about the work and the project. Here at the bottom there is some practical information, not exhaustive, about data and facts.

The video will be visible online from today Thursday, August 27 at 9pm Italian Time to Thursday, September 3 same hour . Feel free to share it. 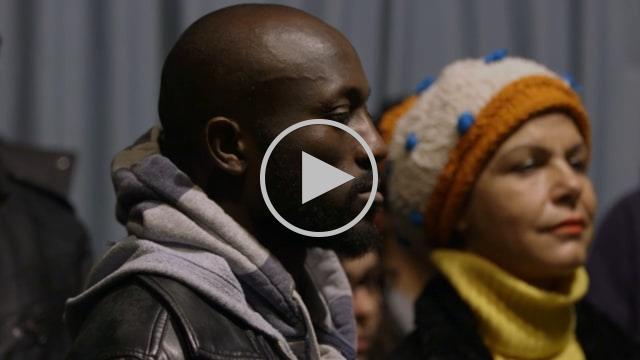 Some practical informations about refugees:

Asylum seeker : is a person persecuted by his/her own country whom request protection by another foreign country, and each state have to offer protection basing on the Genevra Convention of 1951, or according to other forms of international protection.

Dublin Convention: In order to avoid mutiple Asylum’s requests and to determine rapidly the Member State responsible for an asylum claim, the European Union decided to standardize the asylum procedures with the Dublin Convention, effective from September 1997. This is based on the principle that the first Member State where finger prints are stored or an asylum claim is lodged, is responsible for a person’s asylum claim. It’s clear that in accordance with this regulation Italy, due to its geographical characteristics, has become one of the most affected country and no longer able to be just a “transit country” as was in the previous years.

The Dublin Convention caused two paradoxical effects: on the one hand Italy, and Greece should manage alone all the great arrival flow of refugees, and on the other hand Refugees people wishing to go in an other European country looking for a job, found themself without valid documents and therefore they were denied the opportunity to work.

Among the many protests for the acquisition of rights, the most visible and numerous were in Germany, in particular in 2012. With the slogans “We are here” and “Kein mensch ist illegal” (No one is illegal), more than 200 refugees from all around the world rise their voice for the acquisition of social and civil rights, building a protest camp in Oranienplatz, a square in the central Kreuzberg district of Berlin, supported by the solidarity of many citizens and some politicians.

“The camp housed around 100 people from the end of September 2012 until April 2014, when it was cleared. From the dozens of tents that once covered the southern side of the square, only one – an information tent – was allowed to remain, and that was burnt down a few weeks ago. The refugees based there demanded the right to work, the abolition of residenzpflicht and assurances that they will not be deported ”

“The camp housed around 100 people from the end of September 2012 until April 2014, when it was cleared. From the dozens of tents that once covered the southern side of the square, only one – an information tent – was allowed to remain, and that was burnt down a couple of weeks ago. The refugees based there demanded the right to work, the abolition of Residenzpflicht – the regulation that in Germany forbids asylum seekers to leave a certain radius – and assurances that they will not be deported. The camp came about as a direct result of the suicide of an Iranian refugee in a refugee shelter in Würzburg in March 2012 – a tragic episode that revealed how the denial of such freedoms can be too much to bear for often deeply traumatised people who may have experienced war, persecution or other suffering great enough to drive them to leave behind their homes and relatives.” (Nina Rossmann)

Since 8.25.2015 Germany decided not to follow the Dublin Convention anymore for Sirian refugees and welcome them no matter where they first arrived in Europe. This is a big step